An interview with a domestic witch

Hello all! Hope you are having a good weekend so far! I have the place to my self and no better time for a good old blog post! The lovely domestic witch has done the brave thing and asked me for a wee interview, with the following wonderful questions. Brace yourselves.

If you had of asked me this question a month ago, I would have mumbled "nothin!" like a sulky teenager, but over the past few days, I have realised life is what you make it! (Also, I love to write lists. Do nothing about them, I just like writing them. That, and then blame the big fella for not reminding me. Only fair like.) 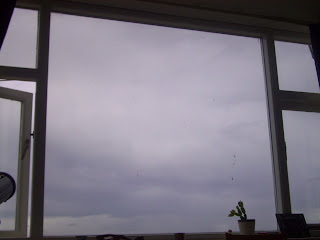 *. Find somebody willing to risk life and death to clean these windows. They are covered in dried in sand like rain drops and bird poo! This is not a major whine, but it is hard when I am too lazy to go outside to take photos and then moan about the dirt on the windows and the glare of the flash on the picture.

Another is when I spend the whole weekend cleaning everything in sight as Big fellas wee Granny (who was awarded Liverpool's most notorious cleaner five years running in her time) comes over for dinner and looks about the place and says, "your windows need cleaning" 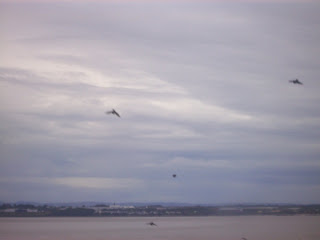 I will find out which one these birds are doing this public display of pooing and.........er.........report them!
But I tell you one thing, I am certainly not attempting to clean the windows myself anytime soon. Gulp! 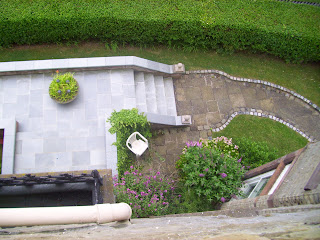 * No, don't worry, I haven't found Micheal Jackson's other glove, it's just a picture of me representing palmistry. That's another topic I am quite interested in and hope to study it through the summer! 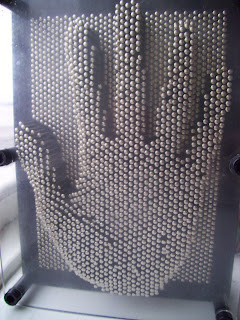 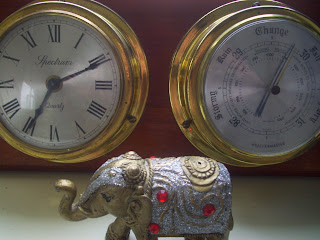 I have grown fond of the clouds that pass by my poo stained windows, and have in turn become interested in weather. I always find the weather forecasts to be completely wrong and it bugs me. So considering the view I have got, I think it would be a wasted opportunity not to. I am researching different cloud formations and the other night I said to the big fella, "I predict it is going to rain". "Yeah, he said, "those big black clouds over head would tell anyone that." So, it's a work in progress, but it did rain, so I wasn't wrong! Ah Ha!


* My market stall. About two years ago, I was drawing a lot, making bags and pillow cases, knitting, the works and was planning to sell it at a local fair held every month. I booked my spot and planned for the set date. The night before this set date, I freaked out and cancelled. Just like that. I as so worried that no body would like my stuff and all that jazz. 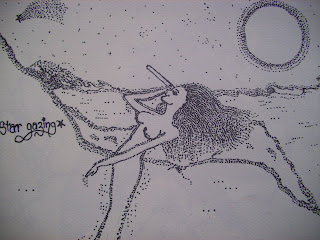 But as I (enviously) tramped through the fair through out the years, I thought maybe I was wee bit hasty. Some people sell barbies with no heads, and the worlds largest jam jar lid collection. 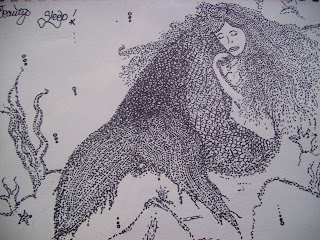 I threw everything else away expect for my drawings. So maybe with a touch up and nice frames, you never know! I better hunt out the knitting gear, today I was outside and their were some brown leaves on the road. The season is going to change soon, I might get it set up in time for Christmas! 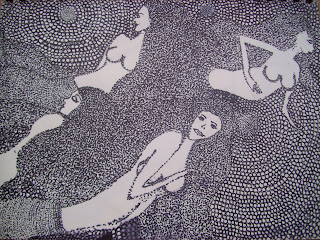 2) You seem to have a nice indoor garden. What do you use the apple mint for?

Thank you very much! Although the recent heat wave nearly killed all my plants (and myself). That and watering them in the morning so they nearly fried,(lesson learned) and as for myself, waiting until the last minute to buy air conditioning , so much so that the heat wave was over by the next day. I might sell that on my stall at Christmas pawning it off as "a machine to get the real atmosphere of a winter wonder land in the home" I must write that one down.

This is my apple mint plant. A ickle baby! 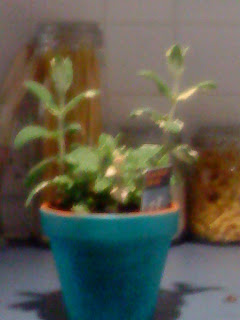 ( can you tell this picture was taken on my trusty camera phone?)
Not now though, it's a monster. I swear I have to look at it twice as I think it is morphing into a Venus fly trap. I would love to say I use the herb in stews, magical potions to stay youthfully young forever and the like, but to be honest, it's the only herb I haven't used and with good reason.
a) It might be a Venus fly trap 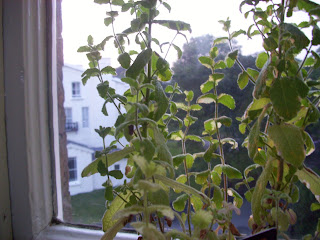 b) It makes a wonderful curtain for unwanted noisy neighbours.

3) What's the best recipe you have made?

Well, where do i begin? (stop laughing) I recently blew up my oven and I don't like microwaves so we seem to be eating a lot of soups! 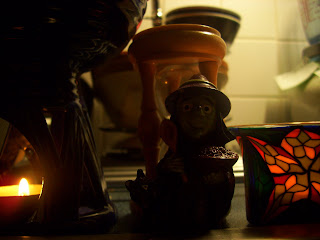 This is my kitchen witch. She helps me not burn dinner. I have had her a while now, but in the last house I rented, I didn't put her in the kitchen as one of the other people who lived there were a bit funny (ignorant) about it. This resulted me one night putting baking soda and not cornflour into a casserole I had ready for 6 hungry guests. ( The worst part is that I served it.) I blame not having her. 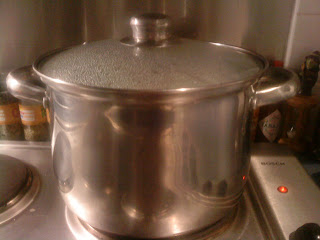 So soup it is. Chicken and sweetcorn chowder was to die for recently!

Not perfect without some herbs sprinkled in. Baking soda banned in new kitchen unless under big fellas and kitchen witch supervision. 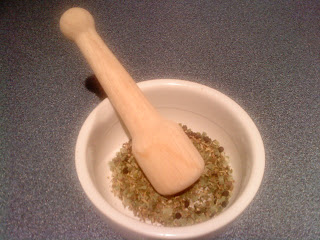 I like a tidy home. I love watching films like Practical magic, Sweet November and even Home Alone (on a summer's day?!?) purely because of the homes based in them. Don't even ask me what the films are about or who's in them. (who I'm I kidding, I can recite every word.) 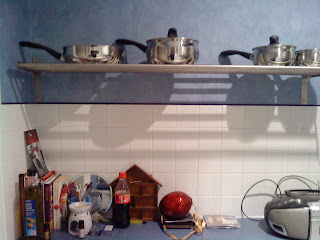 This was a part of my kitchen four weeks after we moved in. Even in this picture it looks so boring. Not cluttered enough! 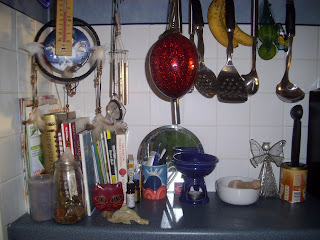 I like it now, but I am on the lookout for more hooks! I love the idea of recipe books in a kitchen ( I got that one out of Home Alone). I want to dry out my herbs and hang them from the shelves (practical magic) I am going to a flea market tomorrow and I can't wait. I want clutter clutter clutter. What did you say? What about big fella? Who's that?
( He got to put a Star Trek framed picture in the hallway, but there is no windows and the light's broken.No one can see it, so it works out fair and square.)

5) What is your favourite scent? How do you incorporate them in your life?

I do love aromatherapy! I have grown quite a collection and found these wee cabinets a flea market of all places! I just gave them a lick of paint and a shelf in the blue one, (a piece cut off the back of a old photograph album and the luck of gravity) I have already brought up my love for geranium, but another favourite is the heady rosewood. Ohh, I love that rosewoody smell! 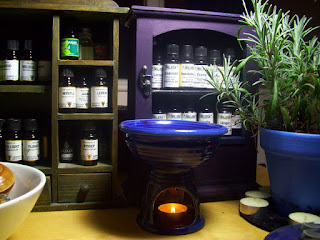 For psychological conditions it is fantastic for

Says it all really. Also what comes in handy is when the big fella has a nagging tooth ache and weeps for the clove oil.
(Yet once relieved of his ache, he does that stupid man thing and says "It didn't really work, it went away before I used it." That's all right love, I will enjoy watching you search for the clove oil that's in my pocket next time that tooth ache decides to come back.)

Can't wait for flea market tomorrow, but at the moment it is raining buckets, I was so busy chatting about myself I forgot to look out the window at the clouds! Let's see what tomorrow's clouds bring us. Some clutter I hope. Bye!
from me to you: clairedulalune at Saturday, July 11, 2009

I love your kitchen and your cabinets with all of your jars, looks like the set of Practial Magic! (I love that movie too!)

Your aromatherapy cabinets are adorable!

What a fantastic post! You had me chuckling away and how interesting are you then? This was a real treat to read. Hope you enjoy the flea market.

*laugh* loving it. Not sure about Home Alone though.... I can just picture him searching or the clove oil now...

Ooooh, I love your little cabinets..all filled with your lotions and potions..deliciously witchy...

Yeah, I get the 'it didn't really work' routine too-- made a lovely tea for B's upset tummy and it got zero credit for easing the queasies...that's alright, love, WE know the truth of it...;)

i love the way your kitchen looks. i am quite sure i know every word to practical magic. <}:o)

You have such an interesting and beautiful home. Those aromatherapy cabinets are a great way to display the oils!

Your posts always bring a smile to my face..baking soda for corn starch? LOL! Now palmestry has always intrigued me and your art work is beautiful. I would say hop to it before Christmas!!

Very interesting, had me laughing. a great way to start my day. Yes you should frame your drawings. they are beautiful. Take care,

Wow what a cool post!!! I looove it!! I adore ones where I get to know folks better!! LOve the mermaid picture - wonderful and the little cabinet!! Lovely place hon!! Lovely you!! Namaste, Sarah

Cool kitchen, cool cabinets for your oils and such!

I love this post. Well gosh, I say that about all your posts. :)

you are too fun !
I love your attitude and getting to know more about you !

Oh my God, I love your picture at the bottom of your sketches with all of the women.