What a way to end a weekend!

Howdy do people! Hope Monday has been kind to you all. Well, in my last post I was telling you all about our lovely wee day out to The Secret Garden. Somebody didn't appreciate that post and struck it as drivel which I thank that person for the constructive criticism. It's not every body's cup of tea which I can appreciate. Now I have a request for you. Show yourself. Please do not strike it as drivel and not leave a comment on why. Thanking you kindly.


I am so sorry about that, it's been one of those days and I am being narky. Stopping now! Anyway, after spending time in the secret garden yesterday, big fella and I soon went home. We walked into the living room and I popped into the kitchen to stick the kettle on. Big fella mumbled something from the living room which I didn't hear. He said it again. Something like, "The fish tank is leaking bad. "

Like a WWF pro tag team wrestling duo, we sprang into action turning off the electricity (me) grabbed every towel in the place (big fella) and grabbed the wee small fish tank. (both)

We were like mad people running to and fro, shouting randomly at the possibilities. "The Fish!" or " The landlady's ceiling is gonna fall in!" or "Thank God we didn't give the other fish tank away!"

Eventually, the water was soaked up from the carpet, not as bad as first thought, and the fish safely transported to the smaller fish tank. 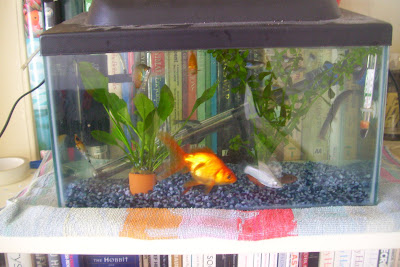 A bit of a tight squeeze for them at the minute, after such luxury, but we will get it sorted soon. As soon as the dust settled and the house was a substantial wreck, broken fish tank in the bath, 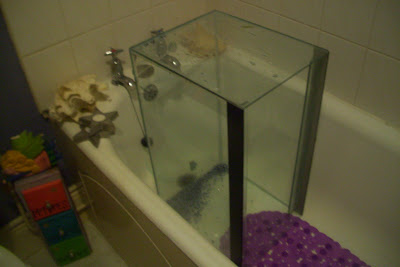 Look at the size of that crack! 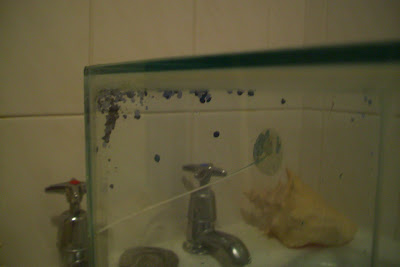 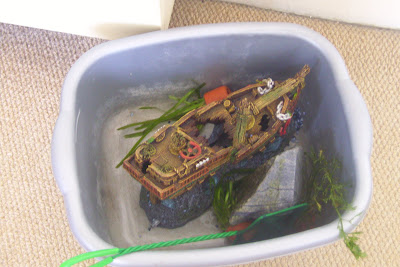 we finally sat down and had a cuppa. We realised that in hindsight, that could have been very dangerous if that had happened while we slept. The electrics could have gone up or anything. It doesn't bear to think about really. We were just lucky to catch it when we did. We were supposed to visit family that day, but they made other plans so we went home, which was a blessing in disguise. Big fella was quite shaken by the whole thing, (he loves them fish) so has faithfully been standing guard watching for leaks in this fish tank ever since. 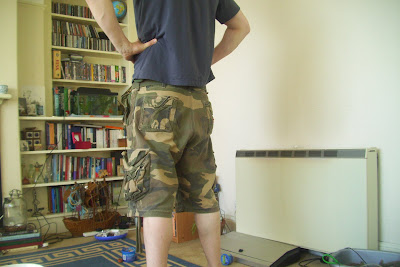 I told him several times throughout the day that it really wasn't necessary but he would not budge. It give me time to write this post. Ah well, fishes are safe and we are safe and that is the main thing. Oh, but what a nightmare at the time. I thought we were going to get electrocuted!
Hope this week brings no more wee surprises like that to keep us on our toes! Toodle pip!
from me to you: clairedulalune at Monday, May 24, 2010

What good luck that you came home when you did! I have to laugh at the photo of Big Fella guarding the tank -- his body language says he'll brook no more nonsense from any leaks!

And as for the Troll who invaded your Secret Garden -- don't listen to those who have no magic in their souls!

As George would have said,yeah Claire, that could have been bad, really bad. So glad to hear that everyone is alright and the fish are settled into their new old home again. Wishing you a wonderful week!

Gosh, you know, I never even noticed that there. I liked yesterday's post. It brought me some good memories...far from drivel.
Mary

Claire, I have had this experience with a six foot saltwater tank. thank gosh is just cracked at the top, but another time a two foot plycostamus jumped out of the tank, it about killed me to get it back in the tank by myself....so I am glad you were both home to take care of that....as for your writing don't change a thing, it maddens me that someone who will critique does not even have enough sense to put there name down to back it up. I have been following your blog for quite some time and this really annoys me. I just read that post and I quite enjoyed it.
My name is Cinner and I stand by that statement. hugs my friend...remember when junk comes along just weed it out. Have a great rest of the day.

My pal is a nut for her fish - she has black things that have grown so large they look prehistoric. My dogs are fascinated by them. Glad you saved them.

Now onto you troll that left you a nasty message. Oh we all suffer from them - I have had a particularly nasty one who is still causing me trouble today - a complete horror.

Just ignore these mean jealous people who need to hit out. They can only get to you if you let them. They are sad lonely bitter people with a will to hurt people because they have nothing in their lives. They move on and leave dreadful msgs on other's blogs. You write a terrific blog, friendly and like coming home for a good chat and a cup of tea. You will always have so much more than the desperate saddo that attempted to hurt you. Feel sorry for them, they are quick sick people. Chin up, we all love your blog and keep going! X

Claire, that would have been really bad if you guys were not at home. I just read your previous post and I thought it was great., I loved the Secret Garden. Whomever commented does not know what they were talking about, especially if they can not put a name to it. You just keep doing what you do and don't change a thing. take care, have a good week.

Thumbs up on the team work - I am glad everyone is okay.

Lord I was not sure my first comment went through. silly me, just letting you know I have not lost it. hugs.

OMG...that is not just scary..but leave it to you to make me giggle and snort. Ackk though water on the carpet and electricity..yikes!
Glad the fish is safe and so are you!!
Ok...for the snarky unpleasant person who commented without being brave enough to show his or her self....shame. If you feel the need to be critical..constructive or not..be big enough to show who you are.
Frankly Claire I adore what you write..I seldom walk away from being here without laughing out loud and feeling better for it!
So hugs and love...and ignore the turkeys, Sarah