The Greatest Adventure for Renee! 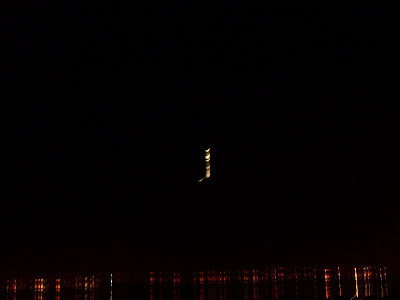 When Big fella and I heard the news of the passing of Renee, we looked out to the moon and she dropped down from the sky in grief, and through the breeze coming in the open window, we heard a long howl and we knew Wee doggie was crying.

We had not heard from Wee doggie after that, it seems the loss over shadowed us. We did not want to going running off on adventures, especially without Renee, she has been with us on all our adventures so far, it did not feel right and life was low.

But soon our paths crossed again. Wee doggie said "Enough of this moping around! Renee will not stand for it! Let's go on a big adventure, the best one yet, let's do it for Renee!!" I squealed loudly and Big fella cheered! Wee doggie was right, Renee would not stand for it and we did miss wee doggie so! So off we trotted!

I was trying to take photos of wee doggie but he flatly refused saying he did not look his best as he was up all night with Renee drinking sloe gin for her birthday, talking and laughing into the night, planning about today's adventure and how much she was looking forward to it. I was wasn't sure whether to believe him or not when he stopped.

We couldn't see any steps. Just a bunch of over run ivy. 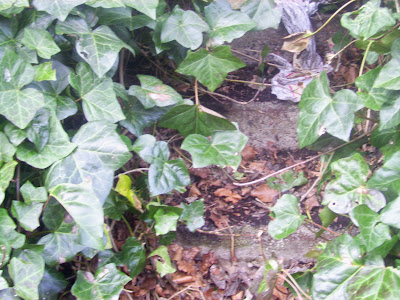 and there underneath the tangled vines and Ivy leaves were some hidden steps. We walked up them , through the ivy until you could not see anything else. Soon we came to a clearing and to a strange looking well. 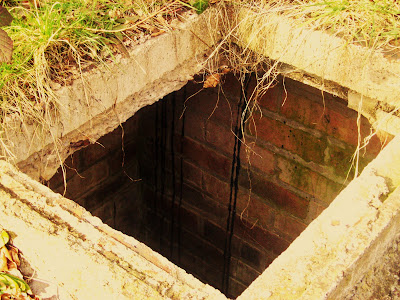 " OK then! Here we are, now just jump straight down that well and we will be where we need to be! You first!" I saw wee doggie nodding at me.

" I beg your pardon! I don't think so! That's so dangerous!" I cried as I peered down the well.

"Renee wouldn't let me go through with that!"

"Oh she would!" came the reply and as I looked swiftly over my shoulder, I could have sworn I saw Renee and wee doggie wink at each other and push me straight down the well!!! I screamed as I fell, only to hear the distance "HAR, HAR!! bellowing from the top of the well, and a laughing face and a waving hand as we sank farther down. Wee doggie and big fella were above me, Wee doggie reading a newspaper intently and above him, big fella flapping his hands by his sides like birds wings and giggling away to himself. He was having a ball! 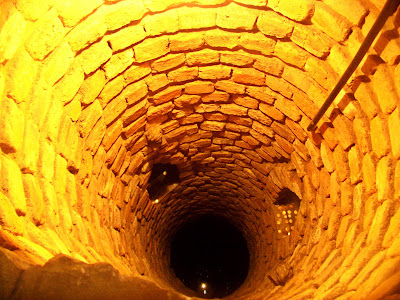 I thought we would never stop falling, until THUD!

"Ow!" My backside took the brunt and it hurt!


Wee doggie floated gracefully down as did Big fella, smile as wide as the world. "Why didn't he fall on his arse like me?" I cried, outraged.


"Because he was flapping his wings, you silly girl! Now come on, look, do you see what is happening?"

The bottom of the tunnel was spreading away into another world. 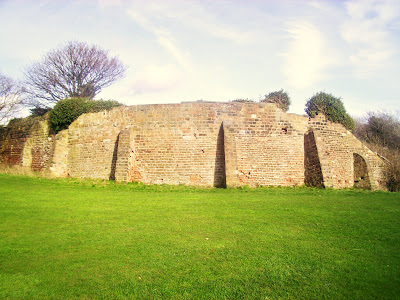 "Let's have a singsong, to help the magic along!" barked wee doggie. "After three! One, two three!"

up to the highest heights,

Let's go and fly I kite and send it soaring,

as we sang the tune, the wall disappeared, brick by brick only to be replaced green fields and hills! 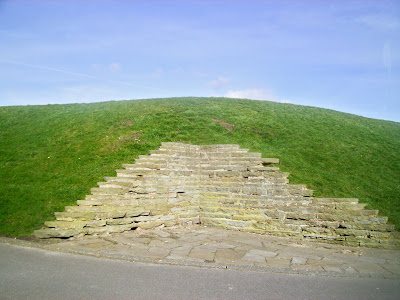 and there in front of us, flying proudly through the wind were a display of most beautiful kites! 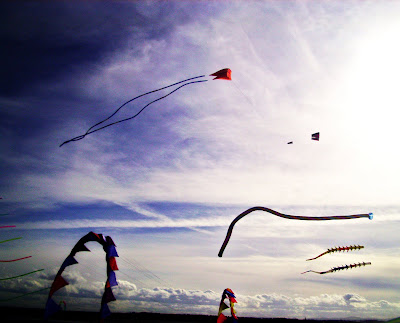 "Now, for the next part of our adventure, we are all going to have to fly over the clouds to reach the next part of our destination." Wee doggie cried, throwing a weary look in my direction, and muttering to big fella about how to control his other half, meaning me, when on a outing.

"I heard that!" I growled and wanting to prove them both wrong, I started waving my arms and hands maniacally like birds wings and running about like a woman possessed shouting "See, I know what to do! I flap my wings! So there!HAHA!" I was smugness personified. but my smugness was shifting as wee doggie and big fella howled laughing at me.


"No dear, you just hold on to the end of a kite. That's how you fly here! Hehehe!" Wee doggie teetered to himself as he and big fella grabbed hold of a tail and flew up up and away! "Wait for me!" I cried and stumbled and fumbled, all fingers and thumbs until I finally caught one and followed suit! 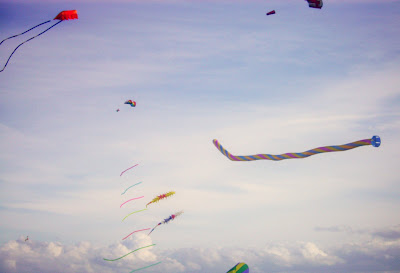 Higher and higher we seemed to have soared, and I felt we were going up to the planets! 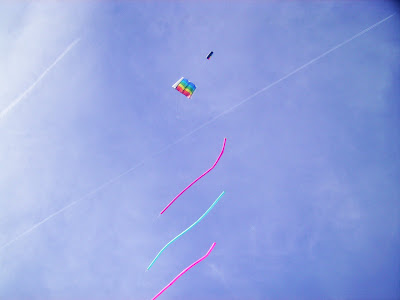 I heard Big fella shout out, "I'm The King of The World!" only for Wee doggie to say, that was a line from Titanic, one of the best films ever made and not to confuse epic lines like the one just roared with kite flying! No messing with Wee Doggie! 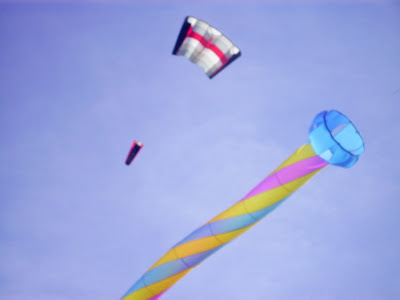 We sound starting to sail downwards slowly and were gently put to the ground as the kites waved and soared in the sky soon away from sight. 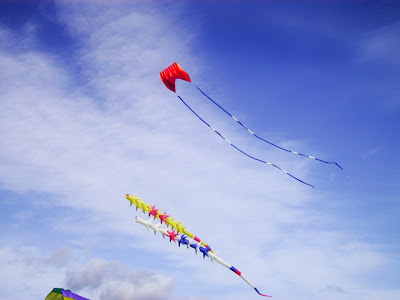 "We are going to see something very special! We are going to see the final return of the Light house by the sea. The giant has held it in his hands as a lantern for his night time roam across the land to keep the treasure safe, but now he must return it as it was a gift from the mermaids.

It is given every six months of the year and the time has come to return this gift. The mermaids use the lighthouse as a look out for human hunting the pirate treasure. It is within these months that humans unexpectedly, for both them and us, end up here by boat with no business to do so!"

"What will the giant do for the next six months?" asked big fella.

"He makes sure the the pirates treasure stays buried in the ground. Come now, the time is nearing!"

We walked down to the sea front. "Here is where the lighthouse will be replaced. Lets move back away, he should be coming any second!" 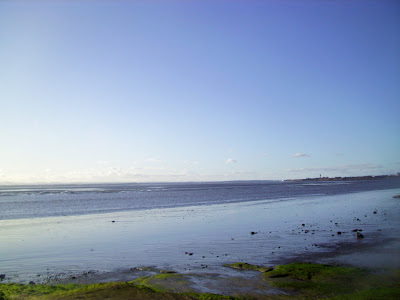 I was about to ask wee doggie, who "He" was, when the earth started rumbling and a loud pounding of footprints rocked the ground below and there, coming towards us was a massive giant holding the light house! He slowly planted the lighthouse firmly into the ground, blew the mermaids a kiss and turned back the way he came! 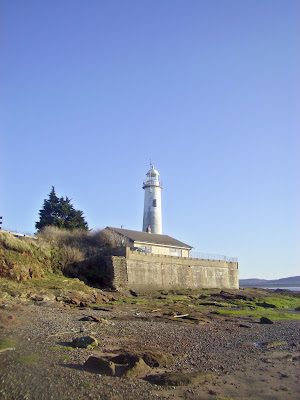 The lighthouse settled in its place and sighed contently. 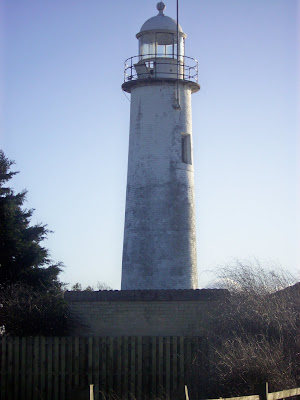 Now, if you think I even thought about taking pictures of the giant, you would be wrong, I was so flabbergasted I just stared! Big fella just whispered "WOW" a few times and even wee doggie's jaw dropped. Just as quick as he came he was gone, but wait, I have prove! 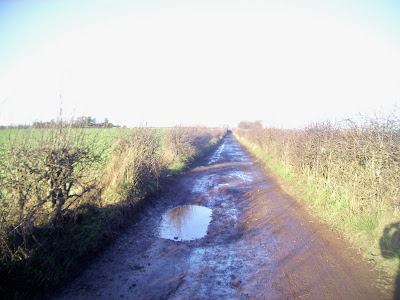 These are the giants footprints! Huge, even bigger than big fella's feet! 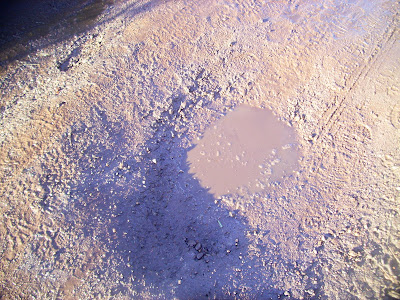 After the initial shock had worn off, wee doggie asked if we would like to see where the pirates treasure was buried. Big fella shot of like a dart, so off we trooped!

"It's buried here by this church, but do be quick the giant will be back any minute and will not be best pleased!" Wee doggie said nervously. 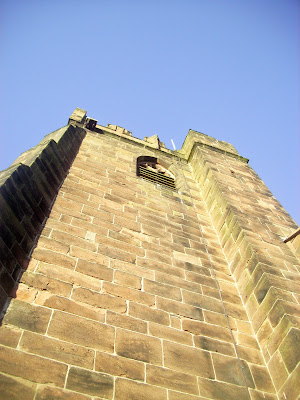 There is was. the skull and crosses made unmistakable. "Come on, come on!" hissed wee doggie, time was running out! 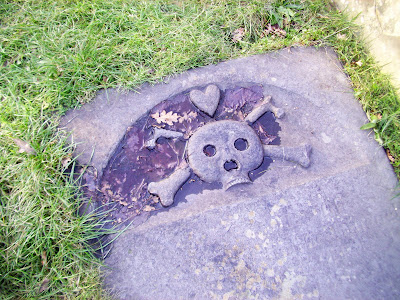 As we snuck a last look at the graveyard, before leaving, a huge shadow grew over the church. 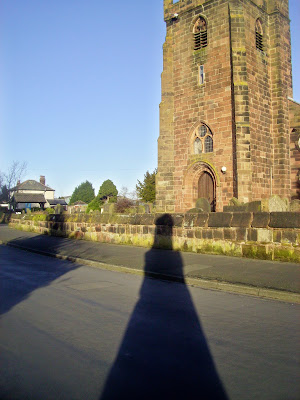 and there in the glare of the sunlight stood the giant. 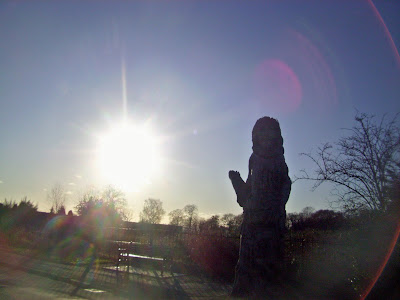 I looked at wee doggie in fear. What would happen?

It's quite all right." said wee doggie, he steps in to a elm tree and is rooted there to guard the treasure until his time comes to roam again!" 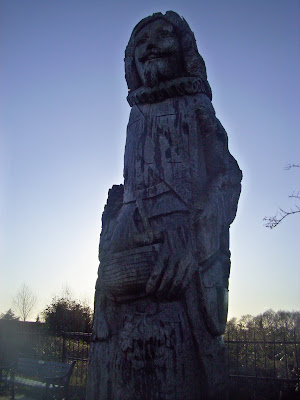 He was a grand giant with a noble yet gentle face, we liked him very much! 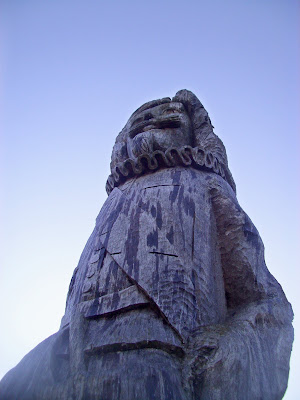 and he stood tall over the land, 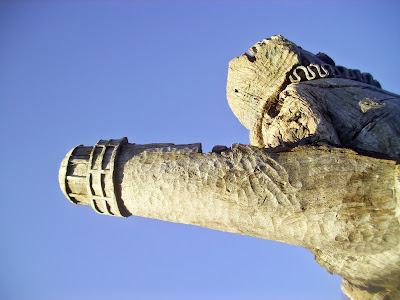 and kept the legacy of the lighthouse in his arms.

Suddenly a face appeared at the bottom of the elm tree. 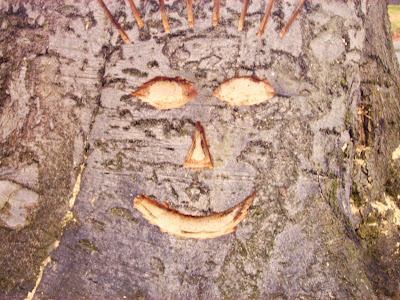 "Hello there! you must be very tired, come lie by me for a while and rest your wary feet"

The tree was right, big fella was already snoring on his feet as he can do at times and wee doggie was yawning and settled himself down beside the tree trunk. I placed big fella to sleep by the tree and lay on his big chest. He truly is my very own giant and I am so lucky to have him.

We soon woke up back in the living room with the sun setting a glorious sky and perfect end to the day. 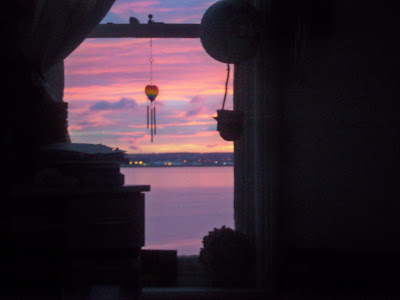 I caught wee doggie leaving through the door.

"Yes, I have a pedicure appointment and you know I have not missed one yet!"

"That's true. Thank you wee doggie for our wonderful adventure for Renee. We must doing it again soon! I felt like she was right there with us the whole time!"

Before he left, he paused and smiled at us both. " HAR HAR!"

I woke up Big fella told tell him Renee was wee doggie even for a spilt second but he just snored louder.

What a wonderful adventure we had!

Now before we go our separate ways after this funfilled adventure please sit back let the following music fill your ears and remember Renee, the lady who could never be forgotten.

WOW! I love the pics, an adventure indeed!

I want to go and snore by a big happy elm too ;-D

What a wonderful adventure to have on Renee's birthday! You are right, I'm sure she was there with you every giant step of the way! That Wee Doggie is a Canny Canine, isn't he?

Oh Claire...oh oh oh I feel such deep joy!! What a wonderful sweet trip..you have taken us on a most amazing journey. I do think I hear a whisper in my ear...what is that...ah yes...Renee is laughing can you hear her dear heart?!!
Love you bunches, Sarah

Ahhhhhhhhhhhh Claire this was beautiful.
Thank you!
Have a wonderful week, love and hugs.
Happy Birthday Renee!
Never forgotten!!!

Another amazing adventure with Wee Doggie! Love the photos - magnificent lighthouse and giant!

Renee would have been thrilled!

Oh, Claire, Claire, Claire. This was a beautiful adventure. You have captured Renee's playful spirit. She certainly had a hand in this, and I could just hear her Har Hars. What a grand adventure and a fantastic salute to our dear friend who will never be forgotten. xoxo