The Day I saw the Fairy Stones.

Hello everyone! Big fella and I went to see our friend Doggie, since we had not heard from him since our Mabon adventure and wanted to see how he was, as we missed him.

Turns out Doggie had just come back from a "Nip and Tuck hair shearing" holiday package, two weeks in Spain, getting pampered and primped all inclusive. The cocktails at the hotel, according to him, were to die for and all in all, great value for money.

So as he was in such a good mood, he asked if we would like to see the fairy stones, which is like Stonehenge for the fairies if you will.

Humans can only see them on a Harvest moon set in October, which is like a blue moon and it is said to be a privilege to encounter them only with the help of doggie of course.
Naturally we both jumped at the chance and stomped off on a adventure until doggie barked "Halt!"

We did. "Well, take a picture of the new improved doggie then!" he cried joyfully! 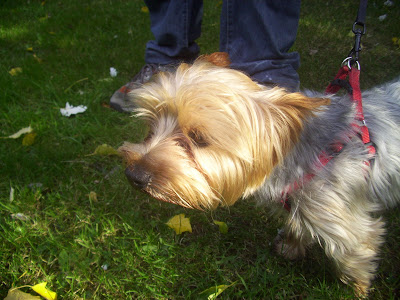 
I must say, the holiday looks like it did him the world of good.

So,off we went down walking down streets and alleyways that we never knew existed until we came to a path way of fallen leaves and trees framing it so.
Doggie began to potter strangely about. 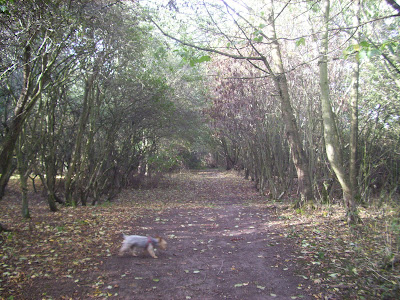 " I know it is around here, I can smell it!" he sniffed and grunted until he came to a huge tree. There in the centre was what can only be described as a circle of hardened sap embedded into the truck.

Doggie told us that this was the begining of Fairy Woods. That was the Amber door bell and to ring it three times and walk through. 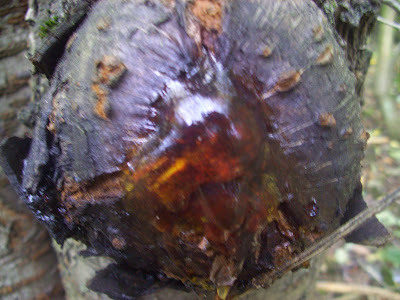 Ring it three times and walked through we did. 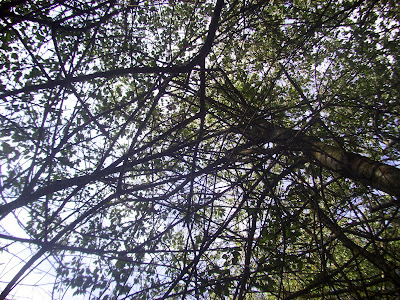 We were immediately enveloped into trees as Doggie described the fairy's entrance with the ceiling of branches.I was enchanted and twirled around looking up at the ceiling only to see the entrance we had gone through was withering away! 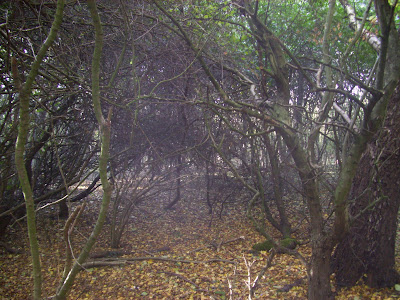 I was so startled, I ran towards big fella and Doggie, only to trip up on a tree branch and fall flat on my face. 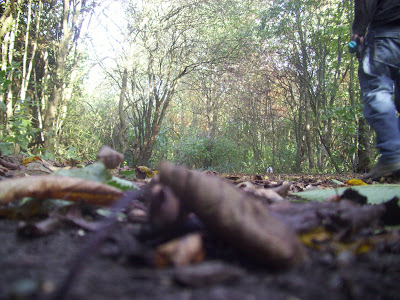 (Just envision a wee curly mop of unruly hair screaming in a broad, unrelenting and exasperated Belfast accent saying, "Helllloooo fellas! I just fell here!" while looking at the above picture.)

Doggie told me to get up and get the leaves off my cheeks because you can only walk forward and never go back. The pathway desegregates after every step a human takes on this day.We can get home at Fallen Leaves Lane at the far end of Fairy woods.

We soon came to a tunnel of some kind. It was called Underneath the tree tunnel. 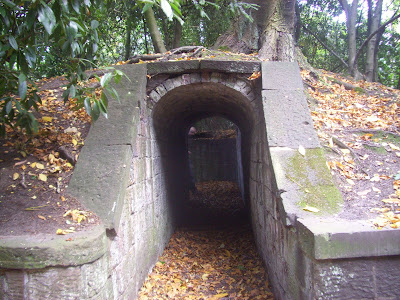 (Can you see the ghost of big fella by the left hand side of tunnel in the above picture? A wee Halloween blog moment for you there.) 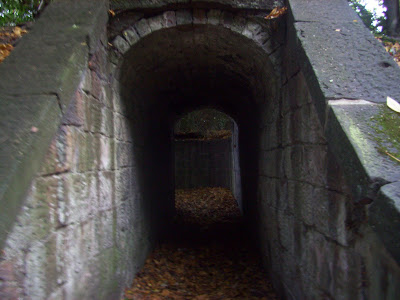 Doggie told us to walk through to the other end of the tunnel.
It was a bit creepy to say the least.

But it was a dead end. Doggie told us to walk back out again. 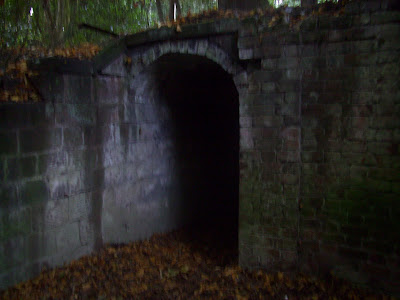 And sure enough on the way out there was a line of strange stones amongst the trees. Doggie told us, as history goes in animal land at least, the stones were placed there by fairy ancestors from many worlds ago.They were said to ride dragonfly's and slayed monsters and dragons, in other words, worry in the nightmares of humans. They would then turn the worries into stone and place them here protecting dreams. 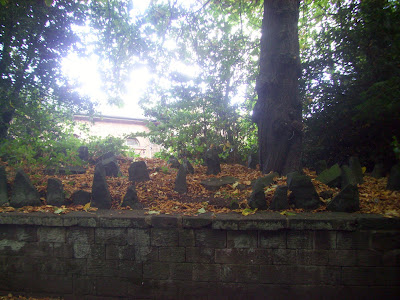 As we walked the pathway of stones that seemed to go on forever, we came to Hedge Way Cave. 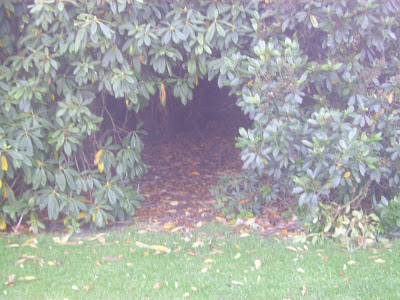 "Now this deserves only the highest of respect" said doggie. We were now entering the Fairy Stone Cluster. 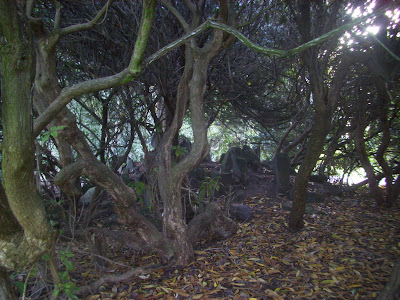 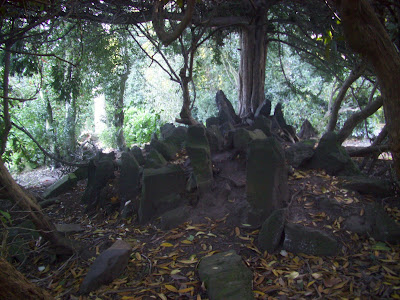 There it was. Fairy's are known to travel from all over the land on this night to celebrate and have festivals, food and song to mark their ancestors courage on this very spot under the light of the full moon.

It is said, only children that dream on this night will hear the sound of the fairies singing, swirling around, storing endless childhood memories of delight.

We walked past the stones, through the other side of Hedgerow Cave, on to Fallen Leaves Lane. 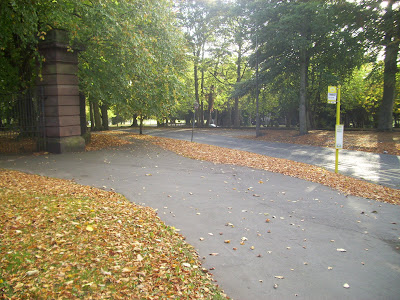 "How long will the bus be doggie?" I enquired. "There is no bus, silly! Just give the leaves a good kick in the air!" said Doggie. So we did! Weeeeeeee! 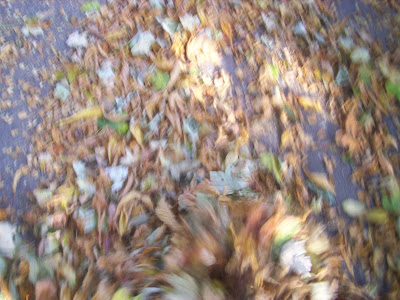 Next thing I knew we were in our living room with big fella snoring on the chair and me?

I seemed to be sitting by the table staring aimlessly at my winter berry plant wondering what just happened.Also, where the hell does that doggie go to? 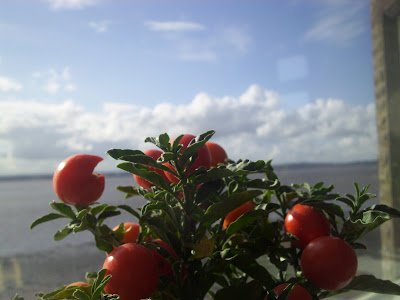 Oh what a wonderful adventure!

I hope all is good in your land!
from me to you: clairedulalune at Friday, October 09, 2009

Oh oh oh I have drawing dancing in my head!!!! OMG how fun was that! Wonderfully creative and just plain fun hon.. Send that pooch my way!!! Hugs, Sarah

What a wonderful tale you have woven with Doggie and the fairies! Are you thinking of writing a childrens book? You really should...I was so in to wondering what the next picture would be. Now if only I could kick those leaves and be transported to your neck of the woods....

What an amazing adventure! Lucky dog!

Wow! That really WAS the faeries' Stonehenge! You're lucky to have such a good doggie friend to show you these places!

I agree you should write a children's book! Terrific story and pictures.

Claire you really should be writing children's books. Your tales are fantastic and so much fun!

OMG. Claire, that was WONDERFUL! Not only have I never seen a fairy circle, (or knew what one was!) the path to finding one was so much fun in your lovely post! Thanks for getting me out of the house this morning and into the fairy state of mind. :p) Hugs, B

Thank you so much Doggie.

I love that you could only go forward and never go back. The pictures were wonderful.

Please give Doggie our thanks. It was a lovely tour.

And you, my friend, are an AMAZING story-teller.

how can I follow you girl? I cant find the followers button :-(