My diffuser is making a mockery of me.

Hello every one I hope you are well! Thank you all so much for all your sweet words of encouragement over my last post. All I shall say is, it is a work in process, but there is always light at the end of the tunnel. Thank you again, procrastination is officially my word of the moment, and I keep on peppering it in conversations, such as,

"Big fella, look out this window here. That bird has been sitting on that rock for three hours now .How do I know? Because I have been watching him all that time! That bird is just procrastinating. Procrastination, that's what that is!"

This weekend was a friends birthday, and he had asked us to join him at a Chinese buffet in town to celebrate. As we (I) are being frugal for now, I suggested (demanded) that we take the train, instead of driving claiming it would do us good to walk to the train station, saving cardboard omissions (as I was soon corrected about that one, I am still learning new words) and saving the whales.Walking soon was a bad idea from my point of view:

a) I am now addicted to my diffuser hair dryer. Chaka Khan is my inspiration. You see, before diffuser came into my life, my hair was like two Cocker spaniels dog ears hanging from my head. This hairdryer is a novelty,and trust me, when I see the soon to be developed photos, I will learn my lesson. But for now diffuser rules and will not learn my lesson until it is too late.

b) We live in a abnormally windy part of town, being by the water and all that. Lets call it turbo charged nature's diffuser! As you can see from the picture below, my hair was raising like yeast two minutes out the door. (I also reminded myself of a 80's John Mcenroe) 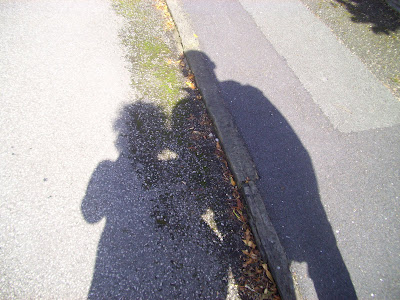 It was beautiful clear evening, with a bright blue sky, showing nature in all its beauty. 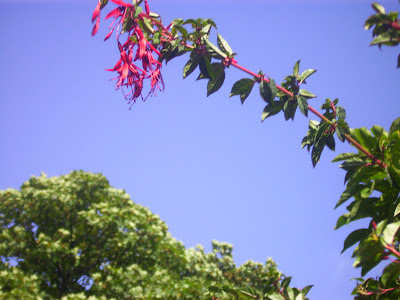 It also showed that autumn is right around the corner! Squeal!!! I love this time of year! My favourite! I have taken a picture of my street now, with just a small lining of leaves, and I will take a picture when all the leaves turn golden orange and red to see the complete change of season. This we be our first autumn living together for the big fella and me, and I am look forwarded to some leaf crunching and confetti of falling ones. Perfect season for picture taking! 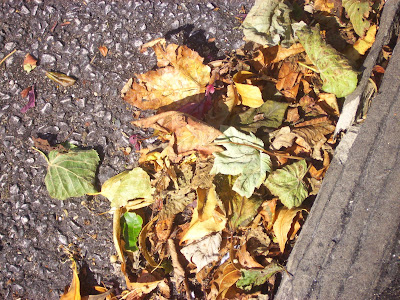 We got the train soon enough, yet in reality due to the price of the tickets, we would have been better taking the car. Which big fella reminded me the whole train journey down, In which I decided to repeatably press the camera shutter button in case I belted him with the camera just to shut him up. 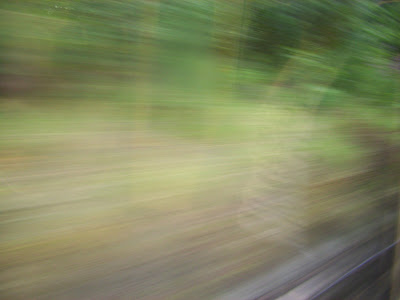 I ended up with a about sixty of these types of pictures.
The train goes quite fast doesn't it?

I had, remarkably, never been to a buffet restaurant and was amazed to find it was a restaurant where you could eat everything! Heaven!
(As I went up for a third helping, I had quite a dark thought of asking the waitress for a bucket so I could fill it up and bring it home. We don't mind eating Chinese food for a month you see.It said unlimited on the menu.)

Unfortunately I can be quite the greedy girl and I went too far with the soy sauce.My dessert was ruined.

It was lovely to catch up with friends and have a good laugh and a great time was had by all.

Since we bought return tickets we got the train back home again.
Due to the unusually humid evening, the air and all the curling products my hair had turned, as the big fella described it so sensitively, Side Show Bob like to the point that he point blank refused to walk alongside me for the reminder of the walk home. (My hair kept getting in his way to be fair.)
I hind sight, from this photograph I think Side Show Bob is slightly inaccurate. I would think more along the lines of little Chucky from the cartoon Rug Rats would describe my hair slightly better. 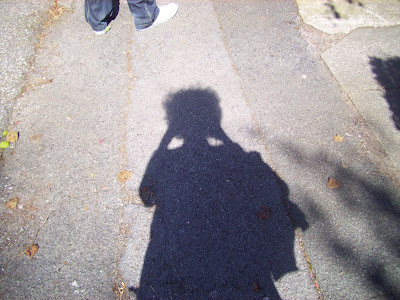 I am away to write some lists of things to do for the week! Here's hoping I don't lose them! Take care everyone!
from me to you: clairedulalune at Sunday, August 16, 2009

Aww you've made me homesick for trains. I did a cross country trip the summer I turned 16...whoa thats starting to sound way too much like a love ballad....I'll stop there.

ok one more detail, I had my first kiss on that train!

Sounds like a fantastic night out. Thrilled that things are working out and going to be fine.
(((HUGS))

Glad you had a good time! Hair is dire stuff isn't it...

Glad you had a fun night, I have never been on a train. Will put that on my list. Thanks for your kind words over the weekend. Take care my friend.

When I let my hair grow, I have to have a diffuser. Life without is just too difficult. I'm always so amazed at how some people can get their hair to stay so curly perfect no matter the weather conditions. Perhaps it's the products. When I let my hair go completely gray two years ago, I cut it short. Way short. I love it-gray and all.

My oldest daughter owns an all you can eat pizza buffet restaurant. They opened a month ago and are incredibly busy. I've been a couple of times and surprisingly, it was really good. I'm kind of picky about my pizza and even pickier about buffets-all those people milling around shared food, but it's really fun and quite tasty.

So about that bird procrastinating for three hours...umm, you were watching it the whole time...wasn't that also some form of procrastination? Or, was it field research? heh heh heh...

You always have me rolling! From the Chinese food to the bucket, the diffuser to Chucky..you write the most entertaining posts! I think the big fella likes you just as you are...even if he can't walk beside you all the time!

But now you've made me hungry for Chinese Food. However, I think I'd better drive my wife, despite putting the whales at risk.

I know what you mean about the diffuser! I used to have a curly perm and the diffuser made it go from frizzy to fabulous! :)

Oh yes, I remember my diffuser! I used to love having big hair, now it's straight and limp! Great photos.

left you a little something.....

Your posts never fail to make me chuckle. Even when things go wrong you manage to see the lighter side and are so honest and lovely about it. I adore your hair shadows and the train pics,lol! Big Fella sounds wonderful, I have one like that.

Tick lists, lol, I've just discovered the one on the Google Sidebar and am wasting loads of time adding stupid things just so I can tick the box and watch them disappear.

more laughing and snorting going on here with this story, too !

you paint us such an amazing picture that's so easy to follow along with all the happenings !!

and okay...the hair shadow pics totally got me giggling !