And here's me thinking I had lost my marbles 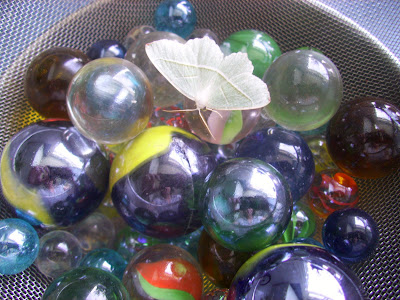 Well, after my bargain bonanza, I was in a very busy mood, and spring cleaned the flat, which was desperately needed.It had to be done, the big fellas idea of cleaning is reminding you about it. I went through drawers and through boxes and came across a bag of marbles I had bought ages ago for work, of course forgetting that young toddlers just love putting them things in their mouths and choking on them.

So discarded they were to the back of the cupboard along with the unopened bills and unposted drunken love letters to the actor James Franco. (Don't even start me.) So since I was cleaning everything, I thought I would clean the marbles too to see them in all their colourful glory. I put them in a sieve, run the tap on them, and left them to dry in the sunshine. With all the pretty colours shimmering in the sunshine, a very pretty moth came in to the flat to get a closer look. He (or she, PC friendly post) stayed there quite a while so I thought "now there's a Kodak moment" and thought I would let you meet little pretty moth.

Soon he/she ( I didn't think to ask if it was male or female) flew to the window desperately clambering to escape ( I was also steeping the big fellas socks in the sink, because even the mighty power of washing machine can't get that pong away. That could have been why.)

So after baptising the flat with aromatherapy oils like the exorist screaming, "Jesus, do you never wash your feet?!?" and " Big foots feet don't smell that bad! and " You are suffocating pretty little moth"to the big fella while he sat staring aimlessly at the fish tank/sea world attraction,(well, he is a Pisces) ignoring my snorts and feet stamping, but soon the flat began looking nice and clean.

Now it is the night time and the flat is nearly in a worse state than it was before,(The big fella knocks a lot of stuff over, I don't call him the big fella for nothin) and my aching feet (and voice) are tired and I must let go of my weekend and back to work I go tomorrow.

I had a lovely weekend and I have left the marbles by the open window just in case pretty little moth comes by again. I doubt it though with that smell, he has probably gone to grouches bin in Sesame Street, it is five stars compared to that. Hope you all are well!
from me to you: clairedulalune at Monday, June 29, 2009

I love the pretty marbles and the moth, who has to be a SHE - have you ever met a "pretty" fella? Didn't thing so!

LOl you crack me up!! I adore marbles and the moth is very sweet!! Ilike them too!! As for the stinky feet - my big guy..yup...but my daughter Hanna - OMG she has the worst feet..soooooo stinky, I make her leave her shoes outside!!! Have a great week hon, Sarah

Your entry is very entertaining indeed. Being from Seattle, I'm not overly familiar with the term "flat." Is that like a condo/English term for it?

I'm so thankful my spouse does not have rotten smelling feet. Yikes.

Hate to be the bearer of bad news..but your pretty moth is probably male - the females tend not to fly about much - they sit around and wait for the males to find them. Just a bit of moth-lore I picked up from our foray into caterpillar husbandry last summer.....;) Who knew I'd ever find use for it?!?!

As for the feet...yup! My Beloved has a fairly ripe set himself...and what with the hot weather here and everything....

Hello! I love marbles, I remember a serious shortage of marbles when I was a kid.

And the moth is definitely a she. She's very pretty.