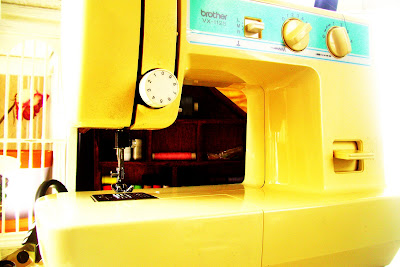 Hello everyone, it is May already! Hope you all had a lovely weekend. Check out my new best friend. My sewing machine. Yes, mine. Yayayay! Sorry very excited over here on this blog, but I love it. Big fella's wee granny was talking about how I would love to sew at her coffee morning and a very generous neighbour offered up this one for me........for free. I could not believe the generosity. She will not expect a thing for it, she said I was doing her a favour as she has a new one and it was just sitting there. Wow. So now I am the proud owner of one. We nearly fell out on the first day though, trying to set it all up. A lot of YouTube videos were watched!

So, I wanted to make myself a wee dress. No patterns for me, just measure yourself, I thought. 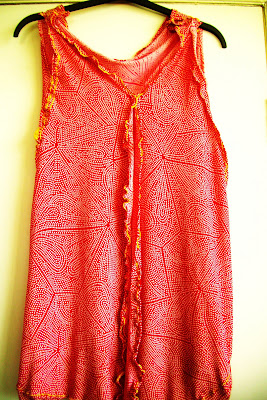 Well now I know better. This was supposed to be a maxi dress. It is just a disgrace to seamstresses around the world. So undeterred, I tried again, and you can't go wrong with the ole WBD. (Wee black dress). Now this is supposed to have two straps at the top but as I was sewing the sequins on, horror of horrors, the needle snapped. So it is now a boob tube dress. Kinda. It could also be a skirt. Ah, practical too. 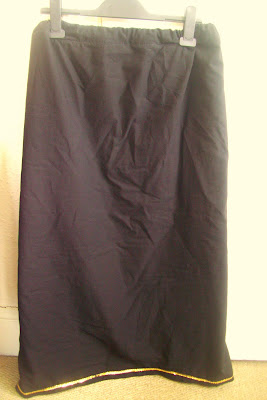 Now, I know what your thinking, its very wrinkly. Well it would be, I wore it out last night! Woohoo! Let me set the scene.

I was sitting with big fella, wondering when he was going to make another cup of tea when I had a brainwave. I was due to go to a dear friends birthday shin dig that night and was debating what to wear. I leaped up and stared at Big Fella. "Oh God, what are you gonna do now Claire?" He knows when I get that look, disaster and tears are not far behind. " I am going to make a dress for tonight and I am going to wear it too!" Big Fella simply shook his head and blessed himself, ready for the calamity that was about to commence.

I wanted a long flowing maxi dress and started daydreaming of me walking into the room, the music stopping and all eyes on me and my beautiful dress that everybody wanted me to make for them. I also envisioned me as Angelina Jolie playing my role.

So with time against me and with fabric and sewing machine whizzing and telling big fella to put a touch of gin in my tea, I started my dream to make it reality! Considering I didn't even measure myself in all the commotion this was not gonna be easy. But damn it, Big fella thinks I will not do it and in my eyes, that it a Goonie style challenge that must be for filled!

After the needle broke I could do no more and announced to Big fella that the dress was finished and pointed my nose in the air and flounced off to try it on. With under lying tones of please,please,please I slipped on my dress and was amazed to find it fitted me. It actually fitted me! I ran into big fella shouting "in your face, in your face!" while jumping about the living room in my homemade dress, sequin hem and all no less, praying that it would hold together and not unravel before his eyes. I think he had the same thing in mind but for other reasons.

So off to the party I hopped. It was not really what I had in mind, but it was a dress and it was wearable. Just about apart from the wonky hemline, but who will see as I am dancing about! I also showed Big fella I could do it! ( I know, I am such a child at times!)

The party was in full swing and the wine was flowing. It was wonderful to see all old friends and catch up with everything. I forgot all about the dress really. After about an hour, some people had a wee bit too much of the ole sauce and and heated debate about politics came up. At the start it was alright, just opinions and stuff, but it was killing the party if you know what I mean. The lovely birthday girl was getting a bit upset because she didn't like the atmosphere and raising voices. She also didn't know what the hell they were talking about. I told her I didn't think they knew either and told her I would try and calm the situation.

By this point the debate was raging and it was getting out of hand. I tried everything, I brought in the next door neighbours dog called Bear a New foundland, 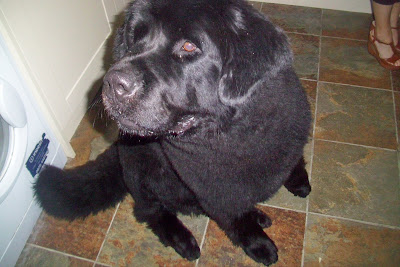 (Beautiful dog! I had the best time of the night with him!) and tried to ride on his back saying "Look! I'm on a furry tractor!" to get their attention but I could not get on him, my hem was too tight, I could hardly walk come to think of it.
Then I thought, "Music!" I stuck on Journey, always a favourite. I climbed up on a chair and I had everybody singing " JUST A SMALL GIRL! LIVING IN A LONELY WORLD! TOOK THE MIGNIGHT TRAIN TO ANYWHEREEEEEEEE!"

Unfortunately, nobody knew the rest of the words, so that's all I had them enthralled for and the argument continued, with the words, " Back to my point! No! back to my point!" I looked at the birthday girl. This wasn't fair. I snapped when I heard the immortal words, "I went to university, so I should know!" I stormed over and said, "Excuse me, just because you went to university does not make you smart. Common sense does! We are here for someones birthday! Stop all this nonsense, you owe a apology to her." Pause. "And I CAN NOT believe not one of you asked me about my dress! I made this you know!!!"

Oh, there's the gin in the tea kicking in. Anyway, crisis averted and we all laughed and the atmosphere changed for the better. We went out and had a bop and dear Big Fella picked up on his way home from work a very tired and emotional Claire drunkenly whispering to him "in your face, tee hee, in your face!" all the way home. Poor man, he deserves a medal. Hope all is well in your world!
from me to you: clairedulalune at Monday, May 03, 2010

Oh Claire...I LOVE your WBD! You did an awesome job! And what a good friend you are, putting a stop to all of the political shenanigans going on at your friends party. You DO indeed make mamy sacrifices, my friend.

I have missed reading your stories, and I am glad to be back. You always, always make me laugh!
Love and hugs to you
xoxoxo

That's the danger of going to parties when the country is less than a week away from an election! I look forward to seeing more of your couture creations!

haha! I loved that...especially the diversions you came up with. Classic :) And the sewing maching coming your way only means one thing to me; good things happen to good people and your slap up the back of the heads of the party-killers, for your friends sake, was proof of that. Good job! Also, I've HAD a sewing machine for 8 years, used twice. If I could manage to whip up a dress like that for a night out, I'd feel invicible. I can't even remember how to thread the damn thing anymore! :) Great post, loved reading it.

Quite the party! Good for you for breaking up the hollering!

Love the WBD! I'll bet it serves you well in years to come. You could pair it with shawls, sparkles, and even blue jeans - fun!

Giggle Snort...Wee Black Dress in deed!! I looooove it..you fun your boldness..your outspoken wisdom!!
Whahahahahaha! I wish I had been there to see you ride the dog and put the turkey in his place!
I imagine that that sweet DH of yours really enjoys your sweet self!! Thank you for the giggle.
BTW my sewing machine is only second to my camera when it comes to precious possessions!! Congrats on the fun treat!

Oooo I would love it if you added my button to your side bar hon...whoot..thank you hon!

I think I would love to party with you, Claire. Love your WBD!

I seen her in a smokey room, a smell of wine and cheap perfume
For a smile they can share the night

Oh Claire I love your new header! Brings back a lot of memories. Kudos to you for making your own WBD! You are truly a friend to break up all that cussing and fussing at her birthday! Sounds like it was a great party.

Your a good friend to the birthday girl. love the WBD. but love your attitude the best. take care my friend. you are a blast.

Angelina, I loved your story, I smiled all the way through to the end, then I laughed out loud.
You are funny. Always love reading your stuff. Thanks

Hahaha! I just LOVE your stories. Your WBD is lovely, and the sequins are a great touch. I'm so darn impressed with you! Wow! You know, you had me in jitters for a moment. I was afraid that you might break up the political debate with a slip of the dress. Whoops! Well, so glad that did not happen.

And can I tell you, I just LOVE that merry-go-round photo!