Howdy do everyone. Well, I did tell you in my last post I was going to make sconces for big fella and I did, only... they.... they..........ohhh, just read on. My inner Monica Gellar is yelling at me at the moment for silliness. I was just determined to my sconces! 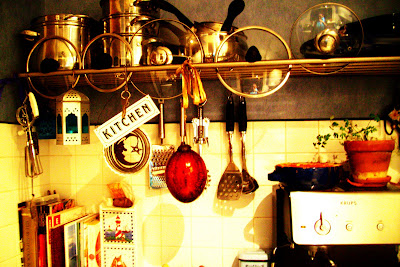 It may be small, but my word, it is compact and does the job! I have every nook and cranny filled with cooking books, utensils and even the kitchen sink. I had everything ready for my sconce recipe post, I had even tidied up and put on a apron! (Gasp!) So first things first. Preheat your oven at 200 degrees. In doing this, it will probably not bellow out smoke like ours did. 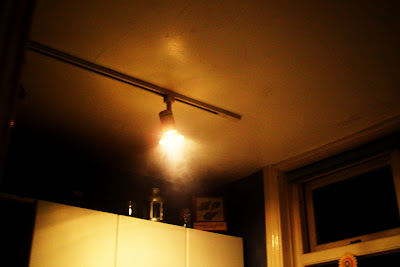 This picture does no justice, the smoke was rife. So what do you do in this kind of crisis of confusion, fear and smoke filled lungs? Ring big fella of course.
Brrriinngggg, Brrinnnnggggggg:
Big Fella: Hiya!
Me: Big fella! The oven is bellowing out smoke and I haven't even baked anything yet!
Big Fella: You blew up the oven again?
Me: Not yet! There is just lots of black smoke coming out after I switched it on! Is it broken?
Big Fella: Mmmm, no, but I made cheese and onion toasties today and I watched a load of cheese melt down into the oven, loads of it, just melting off and all over the oven! It was pretty funny. That's probably the cause.
I won't go on with the rest of this conversation, it just goes down hill from there.
After spending an half an hour cleaning the oven and hoping on a wing and a prayer, I switched it on again and hoped for the best.
Now, prepare. Get all your utensils and ingredients ready. Do not, I repeat, DO NOT forget that you took out the bolt from the weighing machine earlier in the week that is rendered useless if lost and you have no replacement for. 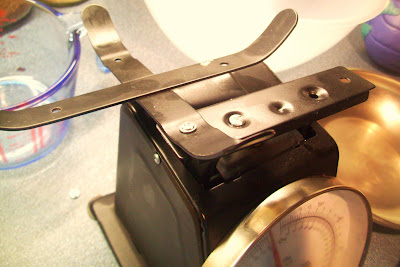 But myself with lightening thinking, quickly took a bolt from one of big fellas guitars and replaced it with that. I must remember to put it back before I forget...........
Anyway, get your ingredients measured and put into bowls and the like so your all raring to go and....I smell onion coming from this butter...............aaawwwww, Big Fella! 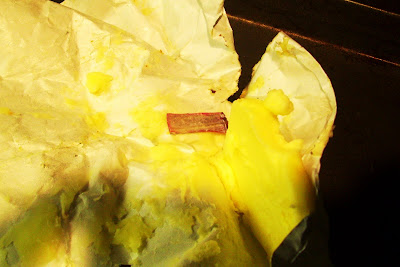 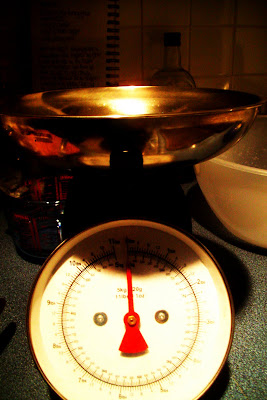 and fresh butter replaced. This would make you put on 5lbs just by looking at it, wouldn't it? But that's how you know your tasting something good, cause it's bad! That equals yum in my book! 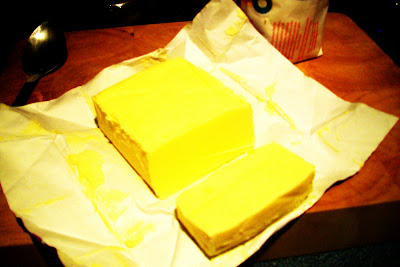 Get a big massive bowl and lets get messy, it's OK, we have aprons on! 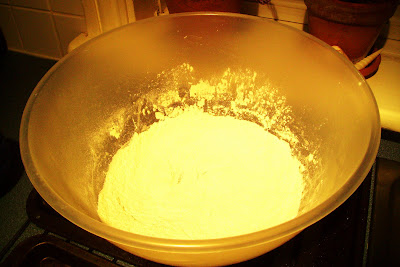 add a wee pinch or two of salt to your flour and pour in the baking powder.

Then this is the best part about baking apart from eating it. Add your butter, delve your hands into the mix. It will feel like velvet just after the sticky part as you add it all together. Lush!
Then add your sugar. Mix that in good and proper too! 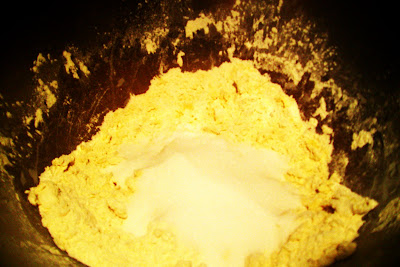 Then add your milk to your cauldron of delight and make into a soft dough.
Sprinkling your work space with flour before hand, slap it down and give it a good kneading to get all the air bubbles out! Very therapeutic too!

Then roll your dough. Be sure to liberally sprinkle your rolling pin too or the dough will stick to it, as it did with me and I nearly threw the lot out the window by this point. Tip: If you don't have a rolling pin don't despair, my mum used a wine bottle to roll her dough, but that's a whole other blog. 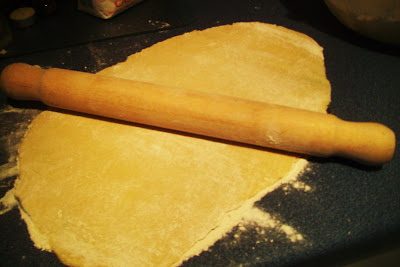 Now, time to cut out the shapes. I just use a cup to cut up my sconces, shapes don't really come out as they are raising. 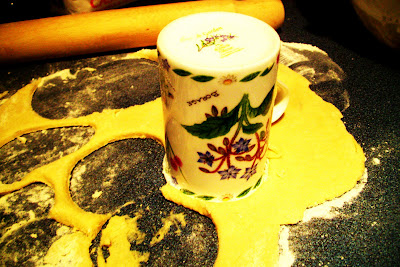 Then, thank God, finally place cuttings on a floured baking tray, glaze with milk.Then find some smelling salts. Not for the sconces, for me. 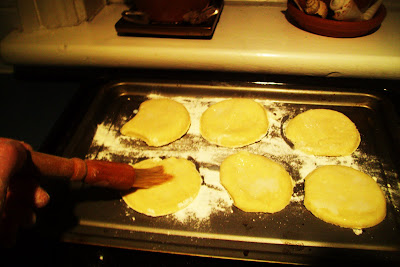 As I opened the oven I realised that cleaning it has not made a blind bit of difference and the smoke continues to bellow out, only not as bad.
I soldier on and wait for the smoke to clear, stick the sconces in the oven and start walking around the place humming "High hopes" in a very high pitched squeal. 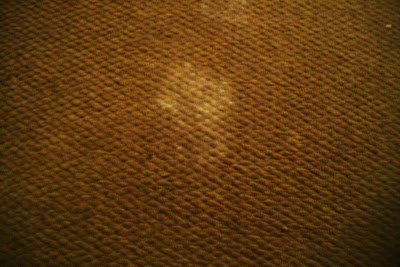 Which in doing that, I proceeded to walk in flour all in the carpets and wearing a apron made no difference in my case because I forget to take my lovely scarf off in the madness of it all. 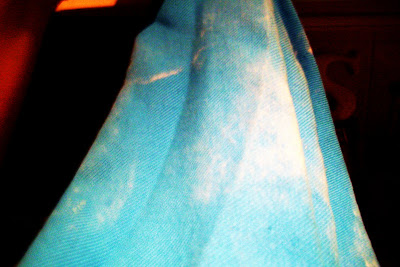 I was then frantically worried that the fire alarm might go off and the fire bridge would come, so I manically opened and shut the oven door repeatedly to let the smoke out the window. It was not a pretty picture. 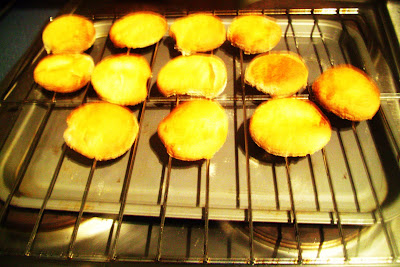 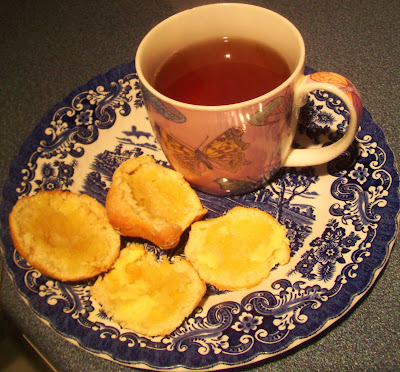 Aww well, when Big fella came in, he laughed at my red sweating face, asked me why I had a face like thunder and took a bite of my sconce. They were not very nice. So I laughed at him too.
So here is the correct recipe if you wish to have a go. Follow my method and you can't fail.
Sconces
500gms self raising flour
12gms of baking powder
a pinch or two of salt
125gms of butter
125gms of caster sugar
250ml of milk
(Twenty minutes in the oven or when golden. Try not to open the oven door.)
I hope all is well in your world and ...................... aww no, big fella has just picked up his guitar and it has fallen to pieces at his feet, I got some explaining to do! Bye!
from me to you: clairedulalune at Tuesday, April 20, 2010

Just remember, it's the thought that counts! I'm sure the big fella enjoyed the sconces made just for him!

Oh Claire - what a job you had today! You are too sweet for wanting to bake, but I don't think the oven was on your side. You are a trooper though. Way to stick it out!

Thanks for the recipe!

~yes your thought was there and i am sure his heart was filled just seeing such an effort made! i l♥ved baking with you today...what a fun filled spirit you have!! now did the guitar get fixed? warm wishes and brightest blessings~

I admire you for taking on the task of scones.... yet have to say it was a wonderful story.... sounded like Lucy trying to make scones. :-) Love your kitchen by the way.... and also that plate with your cup of tea... thanks for the smile

I finally have a working oven. In fact, I have two. I can't wait to try these, Claire.

Did you remember to put the bolt or screw back?

THat so could have been in my house. Great story